Load up the live streams and pop up some popcorn. It’s almost time for the annual trip to Alaska’s Katmai National Park and Preserve—a virtual trip, of course. A fitting adventure for these pandemic times.

Fat Bear Week starts in less than a week—September 30, to be exact. Your vote in this highly-anticipated reality-TV-style event will help decide who will be crowned the fattest bear of the year.

“This week is about body positivity,” wrote the Department of the Interior (DOI) in a blog post. “Fattening up as winter approaches is a matter of life and death for the bears.”

While we humans are busy complaining about the inconvenience of coronavirus quarantine, wild bears in southwest Alaska are preparing for their own kind of isolation—one they must endure every winter. Their annual torpor involves months without food, so they must plump up in the fall to survive their epic fast. The goal is to curl up in their dens at the beginning of the winter as fat as possible. By the time they come out in the spring, a fully grown bear will have lost hundreds of pounds.

According to the DOI, bears aren’t true hibernators like many people think, because they sometimes wake up and move around their dens. But they do spend most of their time sleeping during the winter.

The event aims to be a celebration of good health for the bears, viewed by webcam indulging in fatty salmon at the Brooks River. The largest bears can catch and eat over 100 lbs of salmon every day.

Katmai National Park is on the remote Alaska Peninsula, just north of Kodiak Island. The park boasts impressive geothermal features and a population of about 2200 brown bears, according to the National Park Service.

Traveling to Katmai can be an adventure on its own. There’s no way to drive, so visitors must arrive by boat or air taxi to explore the park’s vast backcountry. If a trip to Alaska doesn’t seem feasible these days, a virtual visit to watch the 2020 Fat Bear Week contestants via webcam is still pretty special.

Since Katmai is so remote, the viral Fat Bear Week posts on social media have been crucial for spreading awareness about bear preservation and providing access to the park for those who wouldn’t otherwise be able to visit in person.

While Fat Bear Week is a fun look into the wild world of bears, the DOI also hopes it will draw attention to the importance of “clean water and healthy ecosystems unaffected by climate change or human influence” to keep these bears alive.

Meet the bears of Fat Bear Week here. All eyes will be on last year’s winner, 435 Holly, to see if she can defend her title as the fattest bear of Katmai.

Sun Sep 27 , 2020
Technavio has been monitoring the connected gym equipment market and it is poised to grow by $ 7.50 bn during 2020-2024, progressing at a CAGR of over 22% during the forecast period. The report offers an up-to-date analysis regarding the current market scenario, latest trends and drivers, and the overall […] 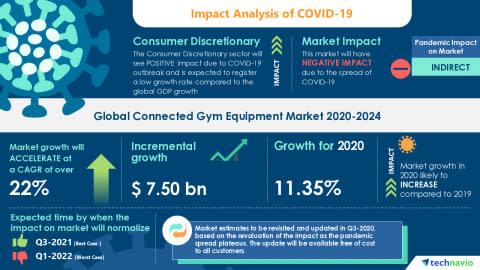 A Full Information To Well being And Fitness

What To Eat Earlier than, Throughout And After Exercise

How To Hold A Freestanding Handstand

A Easy Plan For Life

10 ways to cure an addiction

Any cookies that may not be particularly necessary for the website to function and is used specifically to collect user personal data via analytics, ads, other embedded contents are termed as non-necessary cookies. It is mandatory to procure user consent prior to running these cookies on your website.